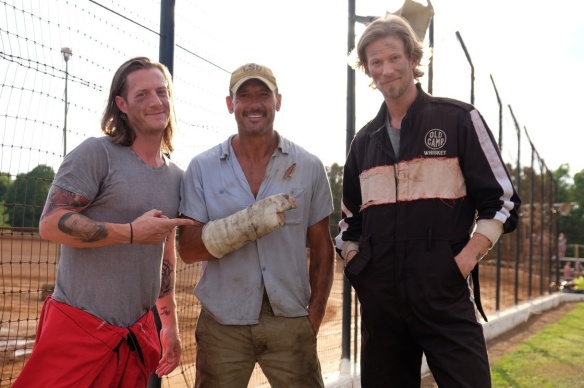 Photo Credit: Justin Mrusek
Nashville, Tenn. (August 23, 2016) – With the release of their highly anticipated DIG
YOUR ROOTS album just around the corner, superstar duo Florida Georgia Line are gearing up for the world premiere of their new “May We All” music video, a one-of-a-kind mini-movie for the project’s second single with exclusive behind-the-scenes footage shot in 360° virtual reality technology.
Premiering exclusively on the FGL YouTube channel Monday (August 29) at 8 p.m. ET, the video is unlike anything Tyler Hubbard and Brian Kelley have done before, with the duo acting out roles as a pair of ultra-competitive, race-car driving brothers and proudly sharing the screen with successful actor and country icon Tim McGraw (who also sings on the track). Leading up to the premiere, fans can get a sneak peek at all the high-speed action with unique behind-the-scenes virtual reality content going live on the FGL YouTube channel tomorrow (August 24).
“Working with Tim on the video was absolutely incredible,” shares Kelley. “Watching him show up pretty much in character the whole time, ready as can be and giving advice – his spirit is amazing and we took notes all day. It is really crazy because we grew up on Tim and having him on the song feels like his stamp of approval.”
Hubbard adds, “We always like to mix things up and push ourselves to do new things. Going full speed ahead with a video that is a mini-movie with more acting was a challenging and fun ride. We can’t wait for the world to see it!”
Directed by award-winning filmmaker TK McKamy, the video was shot over two days at Tennessee National Raceway in Hohenwald, Tenn., and features a gripping storyline filled with dirt-racing action, emotional conflict and a hair-raising cinematic climax, all backed by the groundbreaking duo’s new single, “May We All” – a swaying, shoulder-to-shoulder call for unity in a turbulent time.
To give fans a more in-depth, up-close-and-personal experience, FGL has teamed with YouTube to produce the behind-the-scenes content in 360° virtual reality technology. With the simple Google Cardboard viewer and a smartphone, viewers are transported into an immersive, 360° 3D environment, experiencing FGL like never before. Plus, a special Live From the Set package will be revealed only on theFGL YouTube channel Tuesday (August 30) to show exactly how the incredible project came together. This content series is part of YouTube’s ongoing initiative to support artists and their musical vision with customized campaigns including creative production.
“Virtual reality is more than just an amazing piece of technology – it allows us to make deep connections with people, places and stories that can change the way we experience the world – and there’s no better place for artists to connect with fans than on YouTube,” says Jamie Byrne, Director, YouTube Creators. “We are excited to support the world premiere of Florida Georgia Line’s music video with exclusive 360° virtual reality content, giving fans an exciting new way to experience their favorite duo.”
Featuring “May We All” and the 16-week No. 1 single “H.O.L.Y.,” FGL’s third album DIG YOUR ROOTS will be released on Friday (August 26). Leading up to the album drop, the duo will perform “H.O.L.Y.” on ABC’sGood Morning America and NBC’s The Tonight Show Starring Jimmy Fallon tomorrow (August 24), followed by an interview appearance during the fourth hour of NBC’s Today with Kathy Lee & Hoda on Thursday (August 25). DIG YOUR ROOTS also includes special collaborations with the Backstreet Boys and reggae star Ziggy Marley.
Since breaking out in 2012 with the mega smash “Cruise,” FGL have solidified their place as one of the elite acts in country music, earning prestigious honors from the AMA, ACM Awards, CMA Awards, Billboard Music Awards and CMT. Their previous releases – 2X PLATINUM debut HERE’S TO THE GOOD TIMESand PLATINUM ANYTHING GOES – have attributed to sales nearing 26 million tracks, over 3.5 million albums worldwide and RIAA DIAMOND-certification for “Cruise,” solidifying the hit as the only country single to ever reach sales of over 10 million copies. Their massive debut also overtook the record for longest No. 1 on Billboard’s Hot Country Songs chart.
Notching over 1.5 million tickets sold in 2015 alone, FGL continues their successful streak with heavily sold-out crowds during their headline DIG YOUR ROOTS TOUR, further “cementing FGL as a bona fide headliner after just two albums” (Oakland Press). Throughout the end of 2016, The Cadillac Three, Cole Swindell, and Kane Brown will join the high-octane pair.
For more on Florida Georgia Line, visit FloridaGeorgiaLine.com.