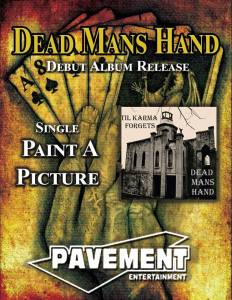 I recently had the chance to interview Kasey from Dead Man’s Hand!  Be sure to check out their debut album – “Til Karma Forgets”  you definitely won’t regret it!   – graci

You might be asking who Dead Man’s Hand is – well let’s let them tell you first before you read the interview!   – Dead Man’s Hand is a band that has risen from the ashes of the Seattle music scene with hard driven rhythms, piercing lead solo’s and breath-taking talent.  Dead Man’s Hand will leave behind a sweet heavy rock taste in your ears.  DMH was formed in Seattle in 2012 by founder/vocalist Kasey McGrew when he teamed up with guitarist Bret Palmer.  After struggling relentlessly to finish the line up they decided to move in 2013 to a less saturated music scene and Bret’s old stomping grounds, Kansas City.

How hard was it for you guys to move from Seattle to Kansas City? I mean it must have been an adjustment going from a city that truly embraces music to Kansas City. No offense to Kansas City, but you don’t exactly think to look there for the great rock sound that you guys are bring out of it!

Seattle is definitely my home. I’ll always be a Northwest kid and I miss and love everyone back home. Truth is, I was ready to make music a hobby and do something else. The idea of Kansas City came up because Bret is from there and knew some people. I figured, why not? I have nothing to lose. So I gave it a shot.

Can you tell me a bit about how the band took shape once you guys were in Kansas City?

We found James through a bulletin board ad and he was just so perfect for us. He loves all kinds of music and it’s really opened us up musically. Jeff had known Bret previously and I tricked him into joining the band by asking if he’d fill in til we found a replacement. Turns out, I haven’t searched too hard for a replacement. He’s the glue that holds the band together and is also responsible for broadening our creativity.

How did you guys come to name the band Dead Man’s Hand?

The name came to Bret one day and he called me and asked what I thought. I was tired of trying to find a name and agreed based on exhaustion. I’ve grown to like the name a lot.

I’m learning that the creation of music is so individual and there is definitely no right or wrong or magic formula. Can you tell us a bit about how you guys went about creating “Til Karma Forgets?”

Basically it’s a collection of ideas we’ve all had for years before we met up. The songs were mostly written acoustically back in Seattle but didn’t really take shape until Jeff and James had joined the group.

Speaking of which, can you tell us a bit about “Till Karma Forgets” and how the song came to be ?

I’d had the idea for awhile. I believe in karma and I think the idea of holding on to something so long, until karma forgets, is pretty damaging. The real pain doesn’t come from the initial pain or betrayal, it comes from the victim questioning everything they could have done to avoid it. I like the idea of letting go. Not sure if I’ve accepted yet.

If we took a peek at your playlist on your phone, what would the last three songs you played be ?

And on that playlist, who would your fans be most surprised to find you listen to ?

Meg Myers. She’s very much pop but an incredible force in music. I really adore her and everything she does.

Who is one of your all time favorite bands, and what is your favorite song of theirs ?

Definitely Alice in Chains. Layne is still the greatest rock singer of all time. My favorite song is probably Love, Hate, Love.

What is one of your favorite songs to perform live ?

Do you remember your first “pinch me” moment ?
When we got the contract from Pavement. Until I saw us on their website, I thought it was a prank. I feel very fortunate they’re taking a chance on us.

What is your favorite meal to prepare and who do you typically prepare it for ?

I love cooking! I think my favorite meal to prepare is probably steak with baby reds, green beans and garlic. Really easy to do but incredibly good. I cook for my girlfriend.

What can fans expect to see from Dead Mans Hand in 2016? Do you have any tour dates coming up?

Hopefully we’ll be playing more, meeting new people and getting some miles behind us. We’re going to be touring in July and I can’t wait to see some new faces!

Do you have anything you’d like to say to your fans ?

More than I could ever express, THANK YOU!