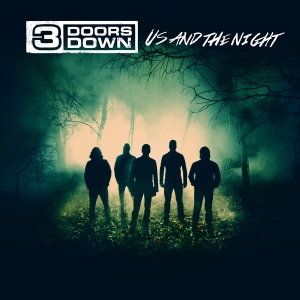 I recently got the chance to have a phone conversation with Chris Henderson of 3 Doors Down, what an honor that was! And what a great guy he is! They have their new CD, “Us And The Night” coming out on March 11, 2016!

graci:   I was able to listen to your guys’ newest cd and it’s awesome! “Us and The Night.”

graci:   To me it felt like I was listening to the music of my teenage years, we are actually the same age. But, it didn’t feel dated, it felt very modern, but yet it felt like it was rock from our era. Did you guys plan that or is that how you see it ?

Chris Henderson:   No, we just wrote some songs, ya know? And that’s how we see it. We try to write from our hearts and write what we feel and go from there.

graci:   I really like “Still Alive” I wondered about some of the lyrics, for instance, “If you could see me on the other side” can you tell me what that means ?

Chris Henderson:   Well, I mean for you it means one thing and for me it means another thing and for Brad who wrote the lyrics it probably means something different. I think what its meant to mean is, just you know once you break down the barrier or once you break down the wall of something you are trying to achieve when someone is trying to tell you that you can’t. See you on the other side is kind of what I think that’s about.

graci:   “I Believe” is another I just love! I was wondering if that was kinda autobiographical for you guys?

Chris Henderson: To some extent maybe for some of us, but not for all of us. I mean for me, no. My parents really never had an opinion on what I did as far as music wise. I don’t think my Dad even know I played guitar until I was 17 years old!

graci:   Which of the songs on “Us and The Night” means the most to you?

Chris Henderson:   Probably the title track, “Us and The Night.“ I think that from where the band has been the last five years, I think that we have been caught up in the night if you will. There has been darkness around us, there has been a lot of tragedy, it’s just been different things that we have had to overcome. I think that this record is a reflection of us overcoming all those things.

graci:   Is there a favorite song of your whole career, that you guys wrote?

Chris Henderson: I don’t know out of 70 songs, I’d have to really think about that. I’ve never really thought about that of having my favorite 3 doors down tracks, but there are so many of them you know ?

graci:   Yeah and there are so many amazing ones !

graci:   So maybe you can help me out on this? I’m not very musically inclined, but love music. So as I did a bit of digging into your guys past it first lists you as the rhythm guitar and then as lead guitar. For us non-musicians can tell us the difference in the two?

Chris Henderson:   It got put in the press that I was the rhythm guitar player for a long time, but I’ve always been the lead guitar player. I’ve always played lead and always played rhythm both. And the other guitar player, Matt, the first guitar player he played lead and he played rhythm. I mean we were both lead and rhythm guitar players and somehow it got put in the press that I was the rhythm player. I don’t know, there really isn’t a big difference when you’re in a band like 3 Doors Down. I guess you know lead guitar typically play solos, but I play solos and I have since the first record and so did the other guitar player. And now me and Chet, the new guitar player we don’t really think of it like that. We just kind of share in the duty and do what comes up. He plays a few and I play a few, you know ?

graci:   So it sounds like it’s just how people distinguish the guitar players?

Chris Henderson:   I think it’s just how people distinguish it, yeah. I think a lot of people put a lot of mystique on the lead player, that they have to be really good and all these different things. It’s not really like that, this isn’t 1986 anymore, but there are some good guys out there.

graci:   Do you guys create your music all together as a group effort?

graci:   Does Brad write most of the lyrics or do you guys all share in that too?

Chris Henderson:   Nah, he writes all of the lyrics. That’s why when people ask me questions about lyrics I really can just answer them from my point of view.

graci: Are you guys adding more tour dates ? I only ask because I’m from Michigan and so far there aren’t any dates here.

Chris Henderson:   We always add more tour dates. There will be more coming up. We’re trying to piece it together now. It’s just really difficult sometimes to get a tour together. We’re working on it, people can just keep checking back on our website. There will definitely be some more dates. And defiantly some Michigan dates because there always are.

graci:   What was your first pinch me moment?

graci:   Right? That would be cool!

Chris Henderson:    Well 3 days before I was under a big machine welding you know.

graci:   So quite the difference.

graci:   What was the last concert you went to that you weren’t playing at ?

graci:   Oh you’re in Nashville? You probably get to see a lot of concerts then?

Chris Henderson:   Well you can if you want to. It’s pretty easy to do here.

graci:   Do you have a favorite song to either pump you up or get you through a bad time ?

graci:   What is something about you that your fans would not expect ?

graci:   Yeah that’s not typical of a lot of Rockstars!

Chris Henderson:   No I’m not a typical Rockstar.

graci:   When you are on tour do you have a favorite food that you eat, that you don’t eat when you’re home ?

Chris Henderson:   No, I’m a really clean eater, so I really pay close attention to what I eat. And I don’t eat anything on the road that I don’t eat at home. I eat really healthy all the time.

graci:   What’s one of your favorite concert experiences that you’ve had while performing.

Chris Henderson:   I had a surreal moment in Australia while we were performing in front of about a hundred thousand people and it’s just this huge crowd at night and the spot lights were going off and in the distance you could see carnival rides and people just enjoying themselves. It was a really cool experience. I would say that would be the moment for me.

graci: And if they pre-order it do they get any downloads now?

“The Broken”
“In The Dark”
“Inside of Me”
Thanks again Chris for taking the time out of your schedule to do an interview with graci rocks! I’ve already pre-ordered my copy of “Us And The Night,” have you? If not, why not?