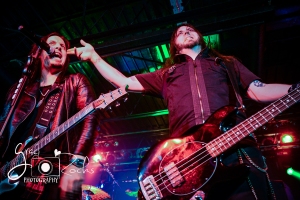 After seeing Rockett Queen open for Scott Stapp I was hooked!  I knew I had to interview them and Walter Lee graciously agreed!

You guys defiantly know how to Rock!  I was blown away by your guys performance with Scott Stapp and became an instant fan!  How did you guys come to join the tour and will you be continuing with the newly announced dates on the tour ?

Well thank you very much we had a great time on the tour. Really we hooked up thru the typical ways management, booking agent type stuff. We are currently working on doing the next run of dates together as well.

The song, “I hate you” is just amazing!   After watching the video a few times, I’m wondering what made you chose that particular concept?   Especially the woman beating up the man, yet during sex it seems clear the man is in control, in this politically correct world, this seems to push it right to the edge?

Well we’ve never been accused of being politically correct. With that video we just wanted to to give a clear picture of how tables can easily be turned in a relationship and how sometimes it can easily get out of control.

Growing up in the late 80‘s I have to say that your songs take me back to that era when Rock and Roll was raw and in your face!  What are your greatest musical influences?

That’s always been the goal for Rockett Queen to put out honest rock music that doesn’t revolve around any type of trend that’s going on at the moment.  I guess our biggest influence would be the feeling you get when you hear your new favorite band for the first time and you just go WOW!

Who would your dream collaboration be with and why?

Do you have a favorite song that either keeps you going during a bad time, or pumps you up ?

Usually anything from Queen would do the trick but there are so many.

What was the last concert you went to that you weren’t performing at ?

We go to a lot of local area shows to check out some of the bands from around here but the last big concert i went to would probably be Rob Zombie, Halestorm, In This Moment and Breaking Benjamin in Dallas.

Not that i don’t eat but i definitely don’t eat as much pizza when im home.

Speaking of food, I’m curious where you decided to eat in Traverse City!   How was your visit ?

we LOVED TC it’s such a nice city. I Don’t remember the name of the place but it was a BBQ type steakhouse that had a tremendous veggie burger.
What does 2016 look like for Rockett Queen ?   Where can we find you and what will you guys be up to ?
We are extremely excited for 2016  we’re looking to continue touring and spreading the new “Goodnight California”  record as much as possible. You can always check out www.rockettqueen.net to stay up to date with what we’ve got going on.
Is there anything you’d like to say to your fans ?
Just a huge thanks to everyone who has shown us the amazing support thus far.