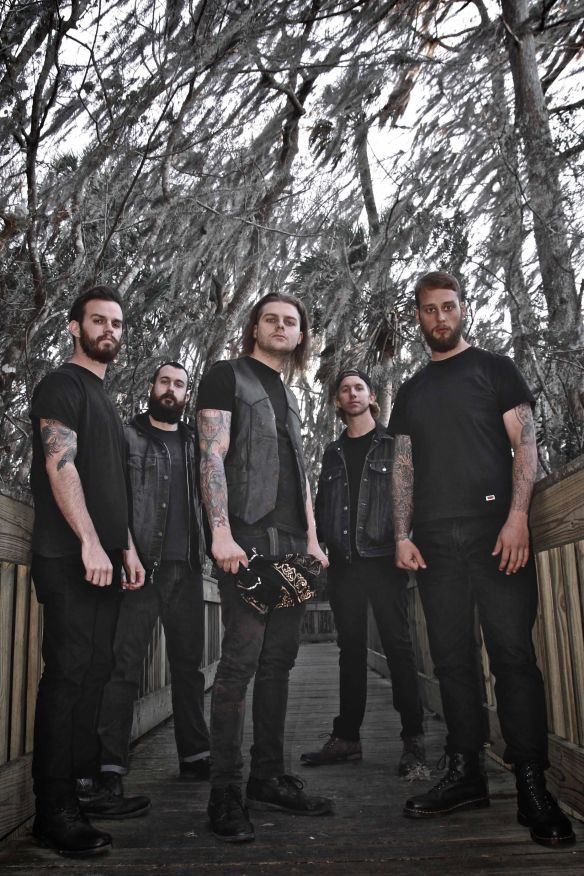 Dark Sermon set off on their new tour yesterday with Thy Art Is Murder on the The Coffin Dragger Tour!  But before they headed out, I had the opportunity to interview Johnny Crowder!   Check out the interview and then go check them out and see if the tour is coming close to you!  – graci

You guys are from one of my favorite places, or actually really close to one of my favorite places.   Anna Maria Island is the place that I would love to be.  It’s so beautiful down there!   My son used to live down there and we would go at least once a year.   We went up to Tampa only once and visited Ybor City and loved walking around there.   We ate at some place called Mary’s?   That was an experience for us coming from a rural northern Michigan town!

My little brother lives on Anna Maria Island! They advertise beautiful sunsets and deliver exactly that. The place in Ybor you’re thinking of is called Hamburger Mary’s, and that’s certainly a mixed bag. I went on bingo night without realizing it and practically got knocked out of my seat.

Growing up in Tampa must have been quite an experience.   What would you say your favorite place to play in Tampa is and why?

I live in a pretty small town called Oldsmar, right on the water of Tampa Bay. It’s a really quiet area, which I think is a nice change of pace from the hustle and bustle of tour. Also, in downtown Tampa, they’ve been sprucing up this spot called Riverwalk along the Hillsborough River. I go there to think and write sometimes. It’s a cool dynamic because you have the industrial sector right behind you and a little slice of Mother Nature right in front of you.

Are all of you guys from Tampa?   How did the group come to be ?

We are all technically from different cities, but our common ground would be Tampa. At least, that’s where the hometown venues are. I was looking for a band to sing for back in late 2008 / early 2009 and these four guys were searching for a vocalist. A friend in another local band actually tipped me off and told me to contact them. We are all lucky to have found each other, that much is certain.

Dark Sermon wasn’t the bands original name,  would you please share why you guys changed it and the significance of the name ?

From 2009 to 2012, we made music that differs starkly from what we write now. We were extremely young back then (literally 15 and 16 years old when we started), and so much of our musical taste and influence has changed in the years since. Even though we had earned a nominal regional following under another name, we decided it would be better to start fresh with our new approach than convince old fans to follow us through such a transformation. The new name embodies what we tend to represent musically: balance and duality. There is no darkness without light, and there is no light without darkness. It’s all about context and perspective, you know? The name itself is an oxymoron. Two opposite concepts married in juxtaposition.

From what I can gather, with the name change came quite the change in sound with the band, did you also have a line up change during that time ?

The lineup changes happened gradually over time. One was before the name change, and the others came after we signed and started touring more consistently. Being in an active band takes a monumental amount of commitment, and I completely understand how it can take a toll on anyone. No one is exempt from that aspect of this lifestyle.

Your videos and lyrics seem to have a spiritual overture to them, but not always the same spiritual (religious) overture to them.   Does this reflect that the band has a diverse spiritual background, or am I reading too much into what I have found ?

You are reading beautifully, actually. My belief system is endlessly complex, littered with snippets from every faith I’ve ever studied, and countless I’ve yet to encounter. I find validity to many of the points made by religion, science, metaphysics, spirituality, and anything in between. I can’t claim any one religion, because I firmly believe contradictory ideas that would invalidate any such assertion. It would take another 10 albums to get anywhere close to explaining what I believe. I am very fortunate to be in a band that allows me such creative liberty so I can speak freely about what speaks to me in turn.

You guys are about to start on an almost two month tour with some really amazing groups!   What will your guys’ playlist sound like in the Van/Bus?

Well, we’ve been fighting to get a head unit installed so we can listen to our phones through the speakers of the van, but that process has taken ages haha. We just have a little portable speaker that we use for the time being. I listen to a lot of older music like Slipknot, Ill Nino, Three Days Grace, Meshuggah, and Korn. The new Ingested album is about as current as I get, and that’s a rarity for me. The guys listen to a lot of Gojira and Tool, and we’ve recently discovered Godflesh (late pass, I know). We can guarantee you’re going to hear some good music in the DS van, no matter who is playing DJ.

On that playlist, what would your fans be most surprised to find out you guys are listening to?

I actually catch a lot of flack for listening to Three Days Grace, but their old vocalist is incredible. When I was younger, the only music I had access to was alternative until I reached middle school. I still have a soft spot for rock like that, because it inspired me to ask for a guitar for my birthday one year, and that changed everything for me. They were one of the first rock bands I ever heard.

* Johnny – if you like Three Days Grace – you might just like Saint Asonia!   Adam Gontier from Three Days Grace is their lead singer, along with Mike Mushok (Staind), Rich Beddoe (Finger Eleven) and Corey Lowery (Eye Empire).

Who is one of your all time favorite artists and your favorite song of theirs ?

Meshuggah is the only band that I listen to every single day on tour. It’s part of my warmup routine. They have a song called Dancers to a Discordant System, and another called Break Those Bones Whose Sinews Gave It Motion, and I play them both back to back while I stretch, meditate, and get ready to hit the stage. They work wonders when it comes to centering me and helping me focus my energy on my set. Preparation is huge for me, and Meshuggah has been a part of my routine for every show since 2012.

What was the last concert you went to that you weren’t performing at?

I went to see a band called No Zodiac in January, and I’m glad I did. It’s very simple music, but great for the gym, and it scratches that heavy itch that creeps up on me when I get too entrenched in death metal.

An unreasonable amount of tour dates and an even more moving live show.

Is there anything you’d like to say to your fans?

To anyone who hasn’t seen us live before, I would definitely recommend making it a priority. Our recorded music does not hold a candle to the energy you feel when you’re in the room with us. And even if you saw us a few months ago, come out again, because I can promise you that our stage show has evolved in the short time that has passed. Lastly and perhaps most importantly, thank you for reading my words. I appreciate you and your time.