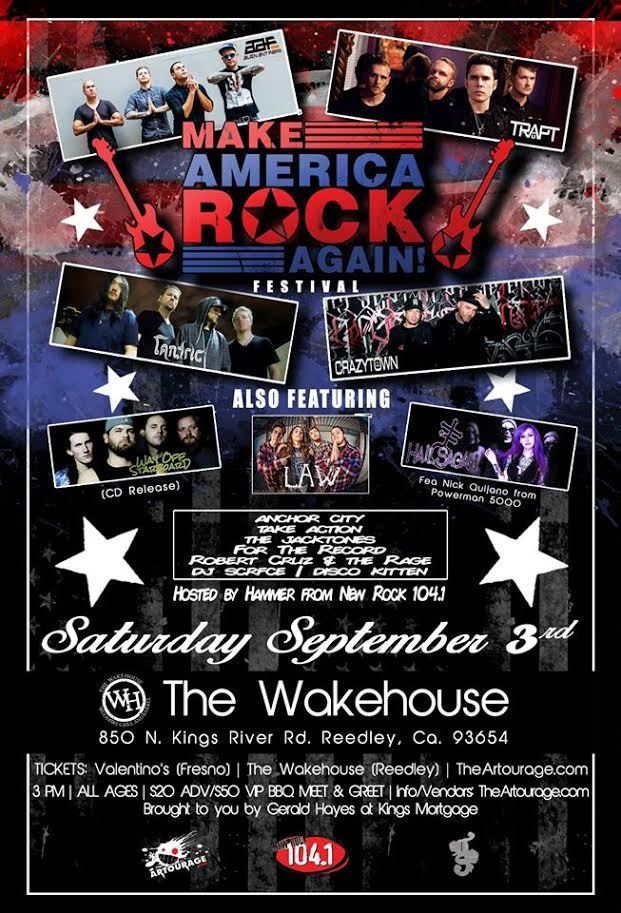 Female fronted Los Angeles hard Rock band HAIL SAGAN has announced that they will be playing in Spokane, Washington at The Pin on August 31st and the Make America Rock Again Tour on September 3rd in Reedley, California (Fresno) at The Wakehouse with Alien Ant Farm, Trapt Tantric and more.

The guitar pictured above will be signed by the band and raffled off at the Make America Rock Again Tour onSept. 3rd in Fresno. The guitar raffle is free for everyone, but we ask you to please make a donation. A portion of the donations will go to the “Love Is Louder” foundation which addresses issues like bullying, negative self-image, discrimination, loneliness, and depression.

Hail Sagan features powerhouse vocalist Sagan Amery, with a devilish masked group rumored to include guitarists Nick Quijano (Powerman 5000) and Andrew Weissberg. Since forming in 2015, the band has amassed a monstrous fanbase, with over 200,000 followers across their social media, solidified further this month with the release of their debut video “Dark Cloud”. The clip, which debuted earlier this month via REVOLVER, has already gained over 112,000 views. The track, and video, which deals with the subject of abuse and bullying, has already resonated strongly with fans.

Amery says ‘ It’s been a great experience being able to broach the subject of bullying and abuse with the lyrics of this song. We took it one step further and created a video with director Matthew Crum and DP Kenny Keeler that visually enhanced the sensitive subject matter. We chose to mask the members of the band in an effort to show the world that anyone can be a part of this, you never know who will be under there, maybe even a fan or someone who needs music to save them.”

You can view the video here: https://www.youtube.com/watch?v=GGK6UYAstnc

The band will release their self-titled debut EP in Fall 2016 on EMP LABEL GROUP, and will be available for pre-order later this month.