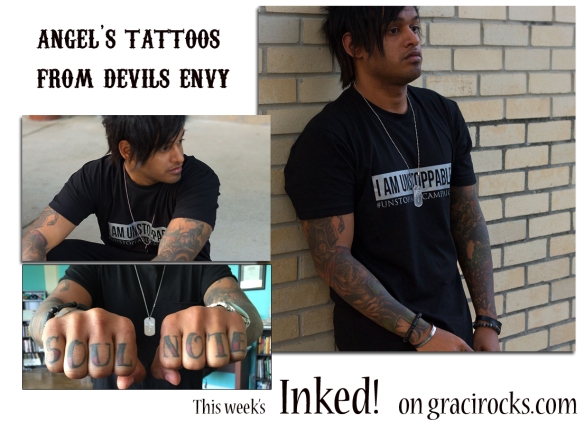 I actually got most of my tattoos done while I was in the U.S. Army, stationed at Ft Gordon, GA. Most of the artwork was done by Chris French. I was married at the time, to the mother of my children. She would go with me to some of the sessions. Otherwise, it was just me, mostly.

I love to draw, and so I would draw up a lot of the artwork I wanted done on me. Most of them were based around songs I wrote, and moments in my life that were important to me. Most of the art styles were inspired by Tim Burton’s work. My first tattoo is on my right shoulder. It’s a drawing I made of a guitar with bat wings with a halo on the headstock, surrounded by little flying bats. It ties in to a bigger picture, which are my sleeves.

The sleeve on my left arm starts at my wrist, showing a full graveyard around my arm, where there’s a monster eating someone into a grave. That monster represents hate, fears, basically the ugliness we sometimes face in our lives that eats us alive mentally and emotionally. It goes up to show a tree with many faces with a tombstone in front of it. Which represents the dying of the old person I used to be before I joined the military; fearful and selfish, with no self control. During then is when I learned how to, not only stand up for myself, but also to serve others and the ones I love. Moving on above that, I have a piece inspired by Avenged Sevenfold’s “Afterlife” artwork, three angels carrying a skeleton up into the heavens, which adds on to the whole meaning behind my left arm sleeve.

On my right arm, I have dedicated it to my musical accomplishments. I’ve added a piece with the goal to complete a full sleeve, every time I feel like I’ve accomplished something within my career as a musician. So far, I have Dimebag Darrell’s guitar on my forearm, with bats flying around it, and it’s being held by a ‘Day of the Dead’ Woman. Above that, I have three Tim Burton-esque beings; two are sown together. And they represent Passion and Creativity, and between them is a child-like being and he represents Music. And of course, the Bat-Guitar, which is my first. Hopefully, I’ll be finishing my right sleeve soon.

My knuckle tattoos I had done after my brother had passed away. He wrote a song called “Soul Note” he recorded on an old tape years ago, and it was beautiful. I can’t bring myself to play it anymore. It means that much to me, and it’s very sad to listen to. I will re-record it someday, and release it, though. Just not this soon. Another one I had done in remembrance of him is on my chest. It says “Beyond The Grave.” Which is from the Anime series “Gungrave.” He and I would watch it over and over again while we were still in High School. My brother was actually the one who gave me my Stage name “Graves.” He said ‘…it’s contradicting, since they say Angels can’t die.’

Angel Graves is the singer and guitar player for Devils Envy!  Devils Envy is Inked! band of the week – be sure to check out his other bandmates tattoos!    – graci